A giant with fragile feet

Naples provincial underground offices have been adapted to antisismic standards. The recently voted antisismic law drastically changed the dangerous area map and several problems for public buildings arose. Buildings that have indeed been constructed in the 50ies – 70ies were generally of a low quality which was widespread at that time. Such lacks of conception and practical works execution are even worse when they concern public buildings which are usually frequented by a large number of people. It’s necessary to act undoubtedly renovating radically the whole building. Provisory solutions would be unuseful or harmful because they wouldn’t be adapted to existing materials and structures but also because they would be done with few means or without preliminary analysis. The case of Naples provincial offices located in the town center is a remarkable example of restoration conceived to comply with the new antisismic standards for underground offices. It became a exemplary case for all building renewals. 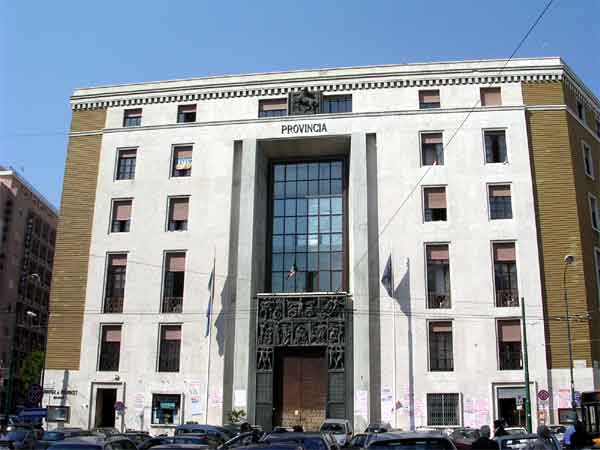 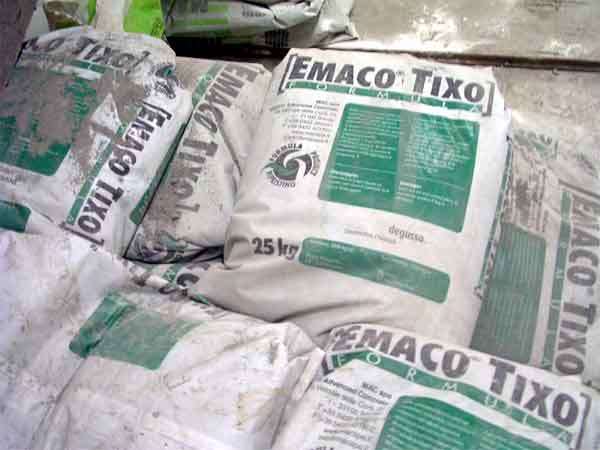 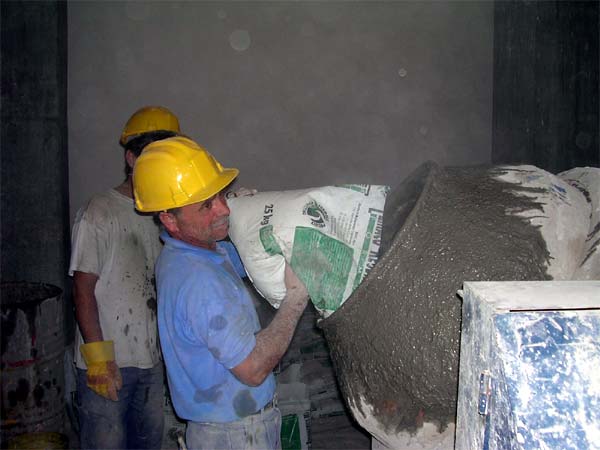 The “Costruzioni Giulisa srl” company completely renewed all load-bearing structures. The work hasn’t been only a renovation of the reinforcement concrete cover (coming out in several cases) but also rising the load-bearing capacities of the pillars and girders. All of them have been reinforced using new armourings which enclosed the original ones. Self-levelling tixotropic mortar has been poured around the structures. The kind of material and Bunker’s concrete pump permitted pouring mortar into formworks with a dense reinforcement. They were necessary to comply with the standards required by the renovation project. Concrete pouring was the critical point given the formworks shapes, the very dense reinforcements as well as the place itself (narrow rooms with few space available) that prevented from using traditional methods. 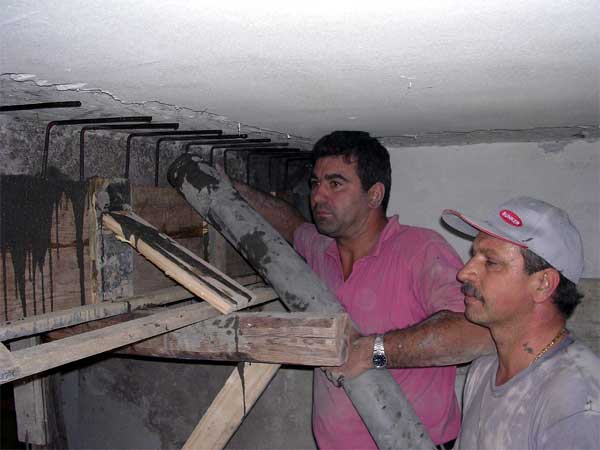 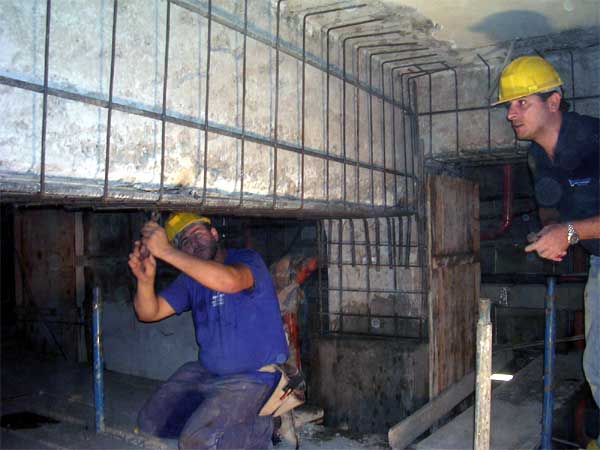 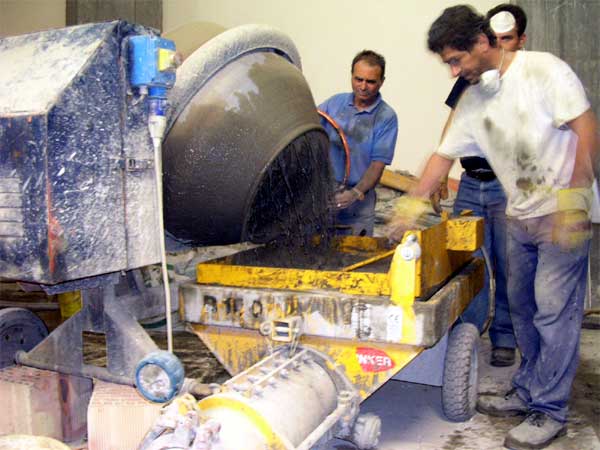 As Domenico Minichini says, “The pump we chose, the B100 model, enabled us to execute pourings which, if made with traditinal methods, would have taken such a long time and would have brought huge feasibility problems. The pumping quality is definitely higher. We used the machine anytime when concrete pumping was necessary (pillars and girders) but as well for plaster spraying on steel wiremseh (necessary to comply with the antisismic law) : we are very satisfied with the result. A last advantage : with this pump, we could prepare the necessary mortar quantity each time and consequently limited material waste and dramatically improved the construction site’s logistics.” We thank Bunker for their technical advice. 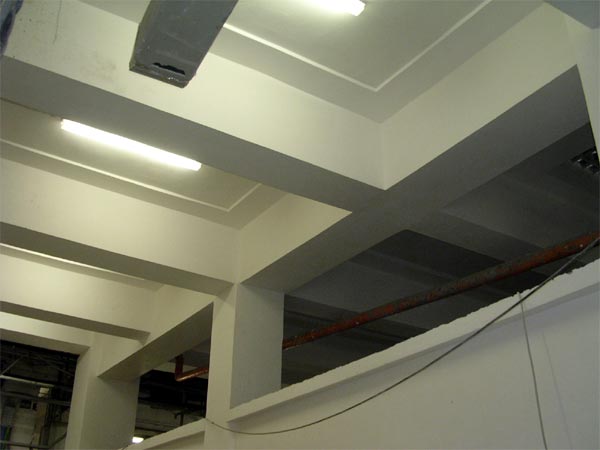 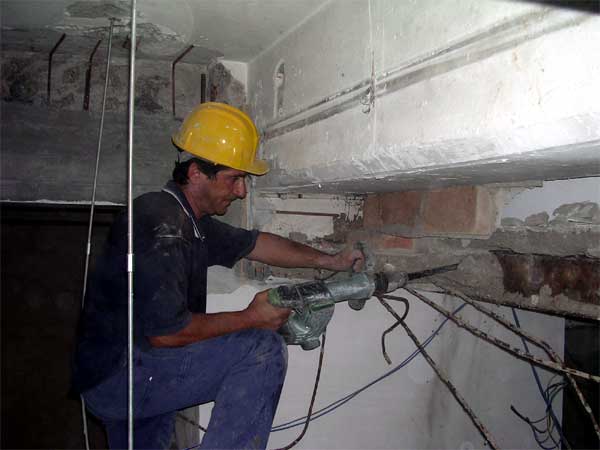 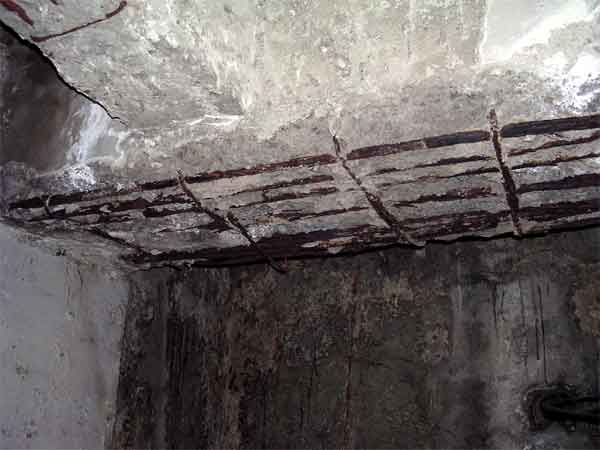 The B100, manufactured by Bunker (Naples) is a screw pump adapted for sprayed concrete, light concrete, premixed materials, fibre-reinforced mortars, self-levelling floor screeds, traditional mortars, cement injections, joint fillings,… The B100 pumps concrete up to a 25 mm grain size and until 45 m horizontally and 15 metres vertically. The pump is powered by a hydraulic power-pack working with a silenced 18, 5 kW Diesel engine (or electric version) with an hydraulic output of 60 l/min. Those features enable the pump to reach a theoretical output of 250 l/min and a theoretical working pressure of 12 bars. The machine has been recently produced in a towable version which can be easily moved on the construction site. The pump can be powered by its hydraulic power-pack or another building machine as an excavator or another machine with appropriated P.T.O. The B100 spray guns offer a polyvalent use of the machine : one for mortar, one for joint fillings, one for sprayed concrete (steel and polyurethane), another for cement injections.

This website uses cookies to improve your experience while you navigate through the website. Out of these, the cookies that are categorized as necessary are stored on your browser as they are essential for the working of basic functionalities of the website. We also use third-party cookies that help us analyze and understand how you use this website. These cookies will be stored in your browser only with your consent. You also have the option to opt-out of these cookies. But opting out of some of these cookies may affect your browsing experience.
Necessary Always Enabled
Necessary cookies are absolutely essential for the website to function properly. This category only includes cookies that ensures basic functionalities and security features of the website. These cookies do not store any personal information.
Non-necessary
Any cookies that may not be particularly necessary for the website to function and is used specifically to collect user personal data via analytics, ads, other embedded contents are termed as non-necessary cookies. It is mandatory to procure user consent prior to running these cookies on your website.
SAVE & ACCEPT