Located on the slopes of Colle Sant’Elmo, the monastery of the Suor Orsola Benincasa institute dominates the entire town and gulf of Naples. The monastery has been built in the 16th and 17th century and is made of eight large buildings. It now hosts a university, the only active private university in Southern Italy, organizing several speciality courses including a “cultural property conservation” course.

To respond the university community needs and renew all areas, renovation works started in 2000 involving the entire perimeter and monastery walls. The tender, financed by the UE was 6 million € worth and was awarded to the “Edil Atellana” from Casagiove, the project has been edited by the architect Renato Sparacio. Besides the demanding restructuring work, new constructions were planned and among them, an Aula Magna and a new general archive which are particularly remarkable by their dimensions and difficulty. 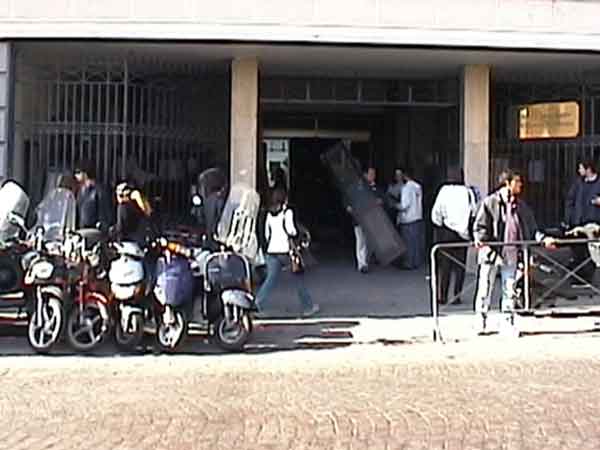 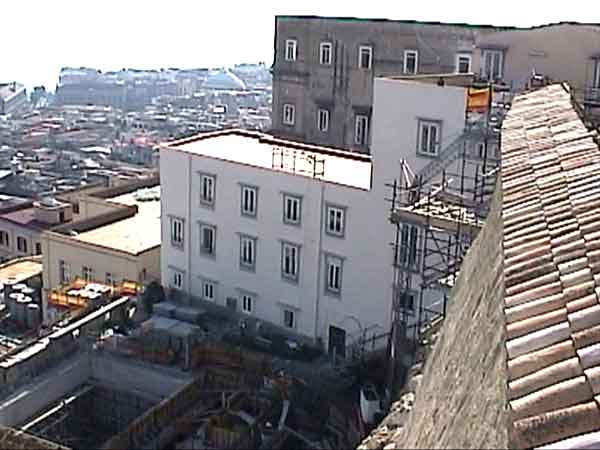 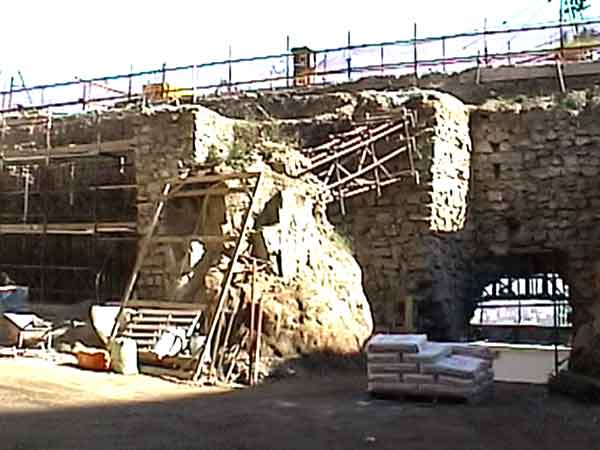 The new Grand Hall has a seating capacity of 400 people and has been completely dug into tufa. Considering the particularly awkward location of the jobsite, a high area almost totally occupied by the space to be built, digging materials have been removed through a pipe and then stocked at a lower level and brought to a dump with trucks. Digging had to be done necessarily with small equipment such as mini excavators or demolition hammers. The company met specific problems to convey concrete for walls and foundation. The concrete quantity to be pumped was quite big, it was thus impossible to use crane baskets to convey it. This system would have interrupted constantly concrete pouring and diminished the construction quality. The company decided to use a screw pump fed with crane baskets. The concrete pumps manufactured by Bunker from Casandrino (Naples) enable conveying large normal or cellular concrete amounts over long distances. They are compact enough to be used even in the difficult jobsite conditions mentioned above. 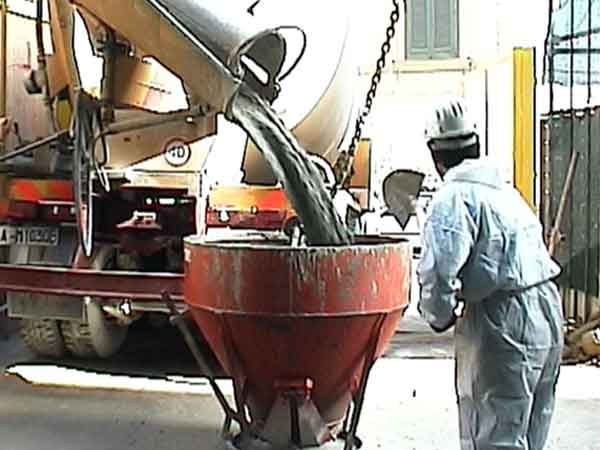 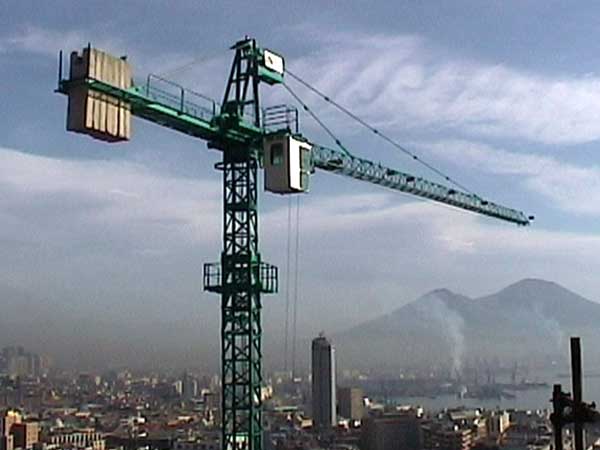 The Grand Hall’s soil has been consolidated with micropiles, the latter have been used in other parts of the building (stairways) and have been reinforced with horizontal and vertical tie rods.The tufa blocks dug during the foundation phase were used to restore the quite deteriorated walls next to the stairway. This section of the wall perimeter had collapsed and has been recovered and consolidated by laying carbon fibre bands and a series of special anchoring ties and micropiles. Reinforced foundation works were done after terrain stabilisation and prepared the space for air conditioning systems. The tufa wall on the Grand Hall side facing the mountain will be exposed while the other side will have a large window with adapted darkening systems being designed to optimise the internal temperature and make it as little affected as possible by external conditions and keeping the view on the Gulf on Naples unobstructed.

All classrooms were renovated. In this case, deadlines were very short: from the day schools closed, July, the 20th until they opened on September, the 15th. It’s very short when you think the renovation works included the whole building. Phreatic humidity issues were solved, the use of some buildings have changed and safety levels have been incremented to meet modern school building standards.Indeed, it has been necessary to consolidate archs by inserting carbon fibre bands to increase their bearing capacities. The phreatic humidity issue proved to be difficult to solve, especially where wall thickness and depth (underground hillside locations meant that the humidity rose as high up to the vaults, which caused consequently effloresence and mould to appear). Solutions have been found : removing deteriorated plasters with mechanical systems like channel diggers and alike and applying dehumidifying plasters to the wall. 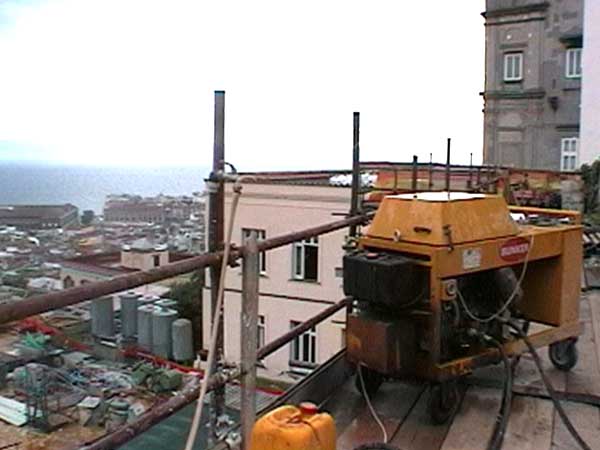 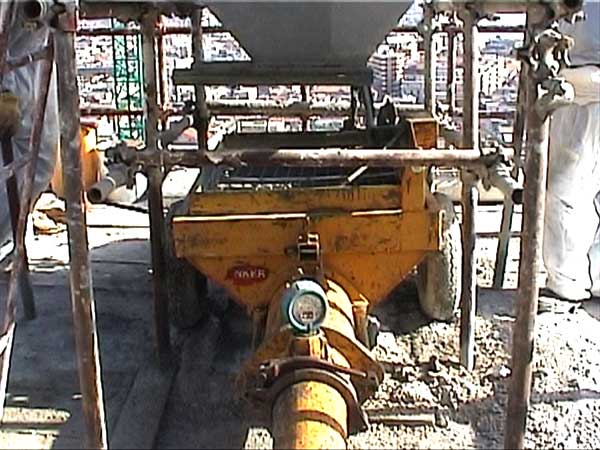 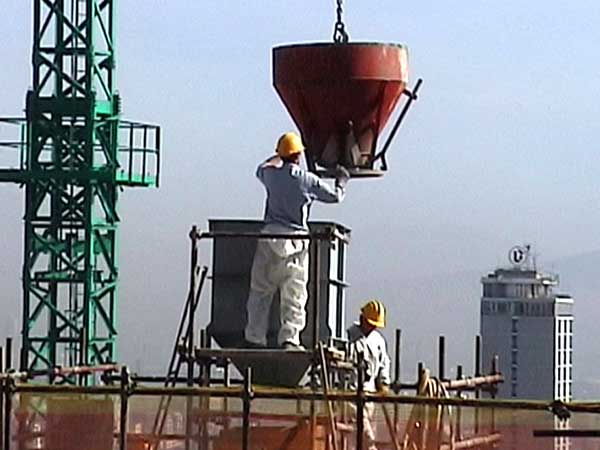 Sanitary installations were as well completely rebuilt. After the building’s consolidation, all plasters and floors were restored with a particular attention to the complete restoration of all significant artefacts such as old wrought iron grids for the nun parlours.

Walls of the ancient monastery were dramatically deteriorated and completely cracked in some cases. It consisted in ensuring safety of existing walls and repair collapsed sections. The external surface was made using the same original tufa and selecting as close as possible sizes and colors as the existing ones. 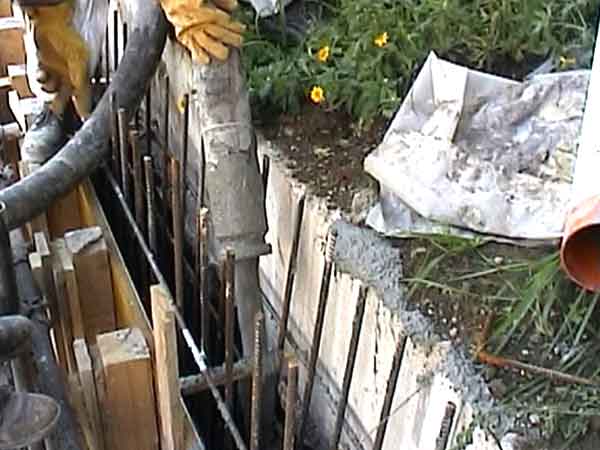 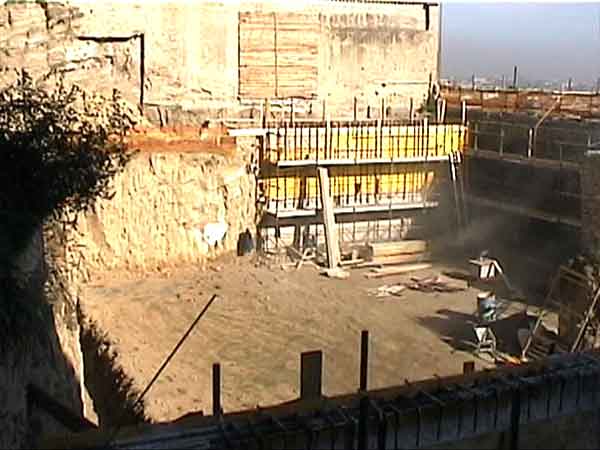 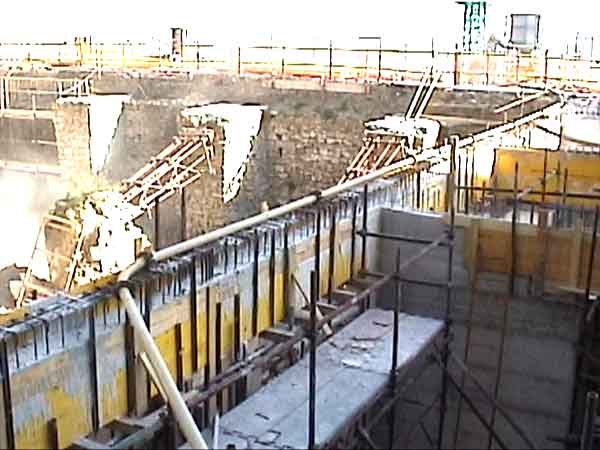 Mortar was also produced with local raw materials, such as tufa and pozzuolana, stones were placed as similarly as in the original form. This “artistic” care was however completed by high technological materials level and techniques used to restore walls’ safety. Carbon fibres supplied by the ATP company of Angri, Salerno were largely used, as 6 cm wide bands applied to the top of wall archs.

The particular conditions of the wall base in some cases required the construction of large size reinforced concrete consolidation bases to a depth of 1.5 m, supported by a series of concrete piles dug deep into the ground. These works were executed with screw pumps enabling concrete conveying through 120 metre long pipes. A great rainwater collection tank was discovered during restoration works and will be used for water storing used for fire fighting. 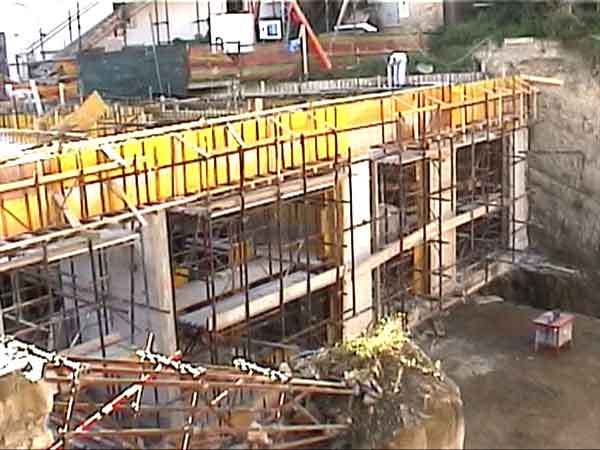 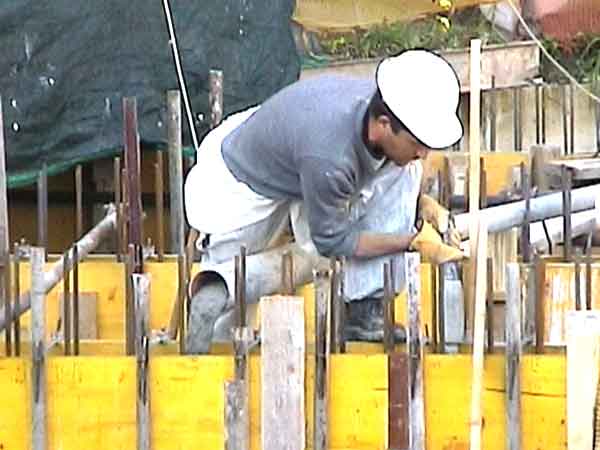 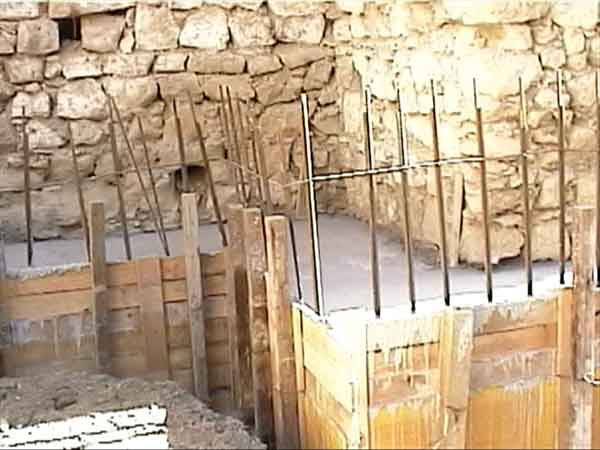 The four levels building used for the archive certainly required a particular effort due to its characteristics and by its location : in the middle of the monastery. Precious antique texts and high value historical documents will be stored there: Therefore, works were particularly intense and included many concrete pourings altogether 1500 m3 conveyed material. All floors were adapted to safety standards (the archive is generally extremely heavy), safety frames were used and a sophisticated air conditioning system was mounted there. All access roads to the monastery have been restored respecting the original structure. It’s been necessary due to the bad state of roads before works and because they’ve been used by building machines and have been consequently damaged. 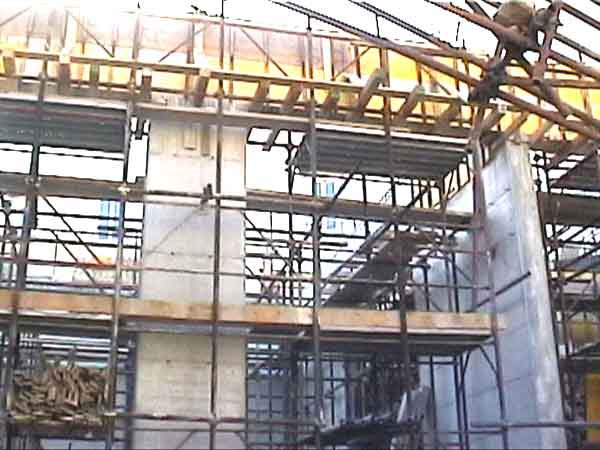 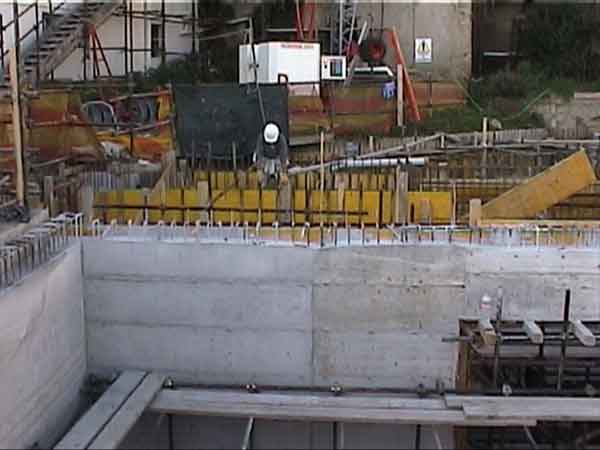 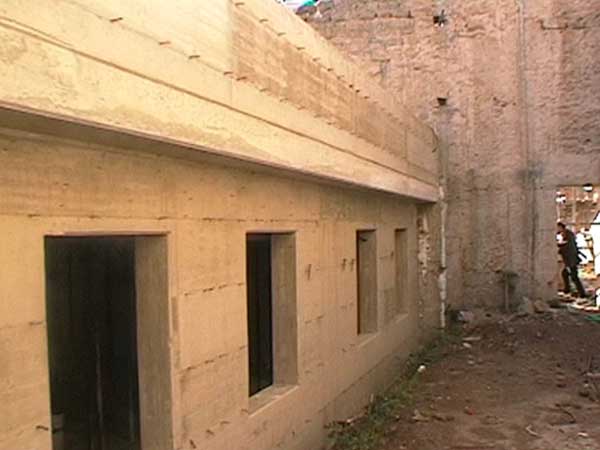 The pumps used for concrete conveying in the jobsite of Naples’ Suor Orsola Benincasa Institute are screw pumps. Manufactured by Bunker from Casandrino, Naples, they are fully hydraulic and are equiped with a progressive output regulation system guaranteeing a uniform pumping without pressure changes that might jeopardise pumping quality. These extremely simple pumps operate through a one principle screw and a two principle natural rubber stator and a feeding screw. 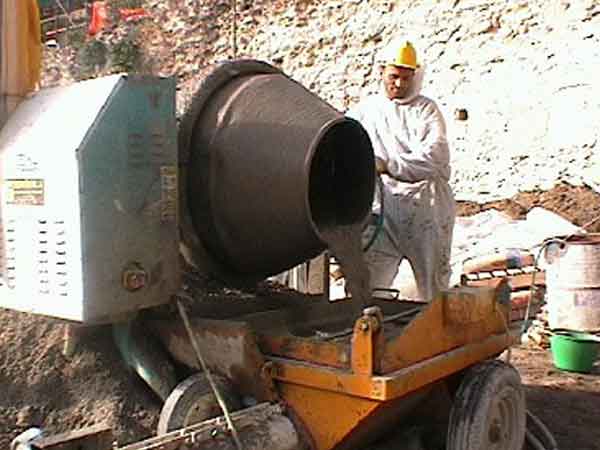 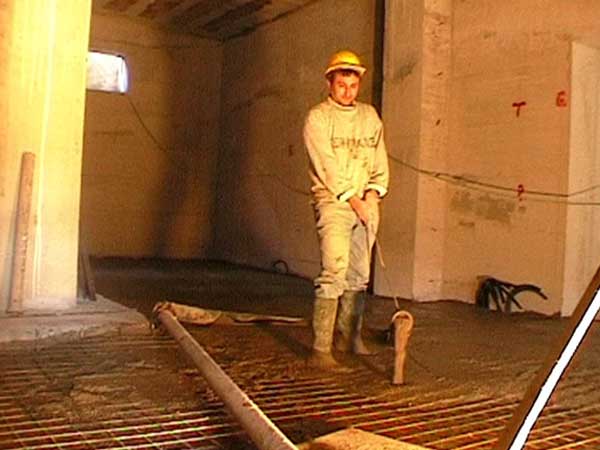 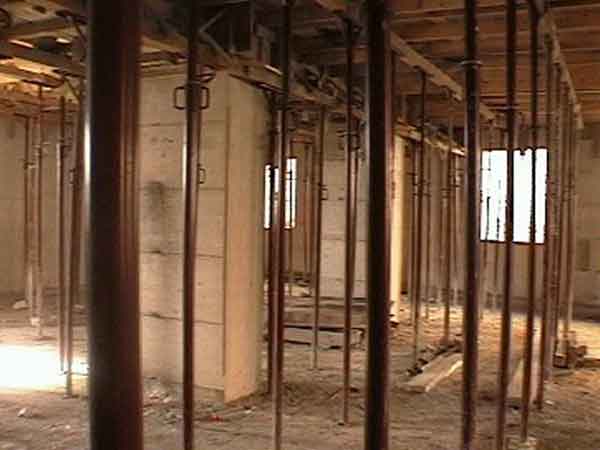 When the rotor turns into the stator, concrete enter cavities formed each 180° and the material is regularly conveyed throug hoses. The feeding screw conveys concrete from the hopper to the stator and prevents mixes from sedimenting. Besides being used for traditional concrete or spritz beton, these pumps can also be used to convey and spray common mortars, thixotropic restoration premixed mortars, to inject cement slurries,… The B100 guarantees a 7 m3/h output at a 25 bar pressure, it can pump up to 25 mm grain size. Equiped with a vibrating screen, the pump is powered by a 60 l/min hydraulic power pack with an orbital hydraulic motor. The pump power enables carrying material to over 60 metres with 30 metre level differences.

This website uses cookies to improve your experience while you navigate through the website. Out of these, the cookies that are categorized as necessary are stored on your browser as they are essential for the working of basic functionalities of the website. We also use third-party cookies that help us analyze and understand how you use this website. These cookies will be stored in your browser only with your consent. You also have the option to opt-out of these cookies. But opting out of some of these cookies may affect your browsing experience.
Necessary Always Enabled
Necessary cookies are absolutely essential for the website to function properly. This category only includes cookies that ensures basic functionalities and security features of the website. These cookies do not store any personal information.
Non-necessary
Any cookies that may not be particularly necessary for the website to function and is used specifically to collect user personal data via analytics, ads, other embedded contents are termed as non-necessary cookies. It is mandatory to procure user consent prior to running these cookies on your website.
SAVE & ACCEPT